You often hear that a book was a ‘such and such’ type of mystery genre. What do all these terms mean? And if we want definitions – what is a mystery? Someone asked a librarian I knew, about the difference between mainstream novels and mysteries. She replied, “If it’s got a dead body in it, it’s a mystery!” I don’t know if literary critics would agree with her, or not, but that’s a topic for another discussion.

To many readers, cozies are the ‘comfort food’ of mysteries. Cozy mysteries are almost always solved by amateur sleuths; someone who falls into the mystery because they happen upon it, or know someone involved, who is usually the person the police suspect. The series features a protagonist (probably female) that solves cases through intuition, gossip and knowledge of human nature rather than through forensics. There is a dead body, of course. (You can’t have a murder mystery without one, after all.) But the reader is not disturbed by a graphic detailing of the scene. There is no violence (the murder takes place off-stage and is simply waiting to be discovered), sex, or foul language. They do require a certain suspension of belief – after all, how many murders can a nice, elderly lady in a small-town stumble across in a year? Cozies have evolved into two types. There is the original “nice, neat little mystery” and now there are nice, neat, little mysteries that involve someone who runs a bakery, for example, so there are recipes included. Or they own a knitting shop and the book contains patterns, or something. You get the idea. When it comes to pets, the cat is the normal choice. In fact, some of the cats even help solve the crime.

These are written by the big-name writers from the 1920s and 30s, and Agatha Christie is considered the “Queen of the Golden Age Mystery” era. In 1928, another mystery writer, S. S. Van Dine, published his Twenty Rules for Detective Stories. My favourite rule states that the killer must not be one of the servants, so ditch the butler, fellow writers!. He also said there must be a dead body – the deader the better.

My question is: What did Van Dine have against letting the butler do it? It’s not as if butlers had been doing in their masters in every other book. In fact, I only know of two instances where the faithful servant did the deed. In 1921, Herbert Jenkins put a gun in the hand of the butler in The Strange Case of Mr. Challoner”. A year after Van Dine published his rules, one of the most popular mystery writers of the period, Mary Roberts Rinehart wrote, The Door, and the butler did, indeed, do it.

The suspects and the victim of the crime are members of a closed group. For example: they are guests in a manor house, traveling companions on a non-stop train, or passengers on a ship at sea. Thus, they often also fall easily into the ‘locked room genre’. However, in the ‘locked room mystery all the characters may not be a suspect, but in the manor mystery all of the people present have a motive for committing the crime. Read Agatha Christie’s Murder on the Orient Express, Dorothy Sayers’ The Queen’s Square, or Margaret Allingham’s Police at the Funeral. Two fun movies involving the English Manor form are Clue, starring Tim Curry, and Murder by Death, written by Neil Simon and having a star-filled cast. It is a wonderful send-up of Christie’s book And Then There Were None.

In the English Manor mystery, an amateur, a law enforcement person, or a private detective could be the person who solves the crime.

A murder has been committed under impossible circumstances and the killer has escaped into thin air. The “king” of this mystery genre is John Dickson Carr. Many people consider his book, The Hollow Man (The Three Coffins in the US), to be the best mystery novel of all-time. Also try Jeffery Deaver’s The Vanished Man. I was stumped by Ellery Queen’s The Chinese Orange Mystery. I was confident I knew who the killer was, but I couldn’t figure out the how of it all. It’s considered one of the ten best locked room mysteries.

These feature the detailed investigation of a crime from the police, or law enforcement, point of view. They gained popularity through two means: the British police inspector (P.D. James’s, Inspector Dagliesh and Colin Dexter’s, Inspector Morse are two examples) and in North America through the radio show, “Dragnet”. Now US police procedurals are many and varied and include authors such as Chester Himes, Ed McBain, Joseph Wambaugh, Craig Johnson, and Bruce Coffin.

Licensed private eyes are the men and women who make their living as detectives, but are not affiliated with a law enforcement agency. By necessity they are often hard-boiled. They have their own sense of justice and morality. This is a sub-genre that is uniquely American in origin but now has members in other countries as well. Here you find the ‘stars’: Dashiell Hammett’s Sam Spade, Mickey Spillane’s Mike Hammer, Raymond Chandler’s Philip Marlowe, and more. Modern day hard-boiled detectives include Walter Mosley’s Leonid McGill, Sara Paretsky’s V. I. Warshawski, Sue Grafton’s Kinsey Malone, and our own Baker Somerset.

As a rule, the licensed private eye of Chandler and Spillane’s time is just holding the detective agency together. The rent is always behind, the Sam Spades and Mike Hammers have a beautiful, smart, and caring girl Friday. Here’s where the femme fatale came into her own. Modern day female detectives have a friend or two they can count on. And always there is someone in law enforcement who is willing to part with information or give the detective a pass when necessary for the sake of justice. You need a fedora, a trench-coat, and a gun to be a hard-boiled P.I.

The noir mystery is at the opposite end of the spectrum from the cozy. The writing is dark and grey and grim. There is violence and often not a happy ending. A single murder may involve multiple story lines. The novels reflect and dig into the ills of society. This is a recent addition to mystery sub-genres and stems from the Scandinavian writers in the 1990s. Popular writers include Stieg Larsson, Karin Fossum, Henning Mankell, and Peter Høeg among others. Once Upon A Time Mysteries

The definition of a historical mystery is quite loose. All agree that the story must take place before the book was published, but there is no agreement on how long before. Many think it should take place before the birth of the author; again no one agrees on how long before. And there seems to be no agreement about how accurately the period must be portrayed. There are mysteries set in every time period from ancient Rome through the present. As a personal rule, I call anything up to (and through) WWII as historical and my two favorite historical mystery writers are Anne Perry for her Victorian era William Monk series, and James Benn for his WWII series. Alternative history is when the author has changed the past. A good example is The Yiddish Policeman’s Union by Michael Chabon. The State of Israel was destroyed in its infancy and many of the world’s Jews now live in a strip of Alaska. His policeman is in Sitka.

The secret mystery involves real history but events that are not known to have happened are used, without changing the past. This popular style has real life people (Eleanor Roosevelt, Margaret Truman, Oscar Wilde and William Shakespeare among others) becoming amateur detectives.

Mysteries in the Future

These are often also a subgenre of science fiction and could deal with hard science, alien worlds, steampunk technology, fantasy and time travel among the many varied worlds of science fiction. It seems crime and its detection transcends time and space. A hard-boiled female detective in a future Boston.

Other Types of Mysteries

In these, you, the reader, witnesses the crime being committed and you know the identity of the villain. The attraction is in seeing how he, or she, is caught. On page one of Francis Iles’ Malice Aforethought you learn of a man’s plan to murder his wife. You are privy to his thoughts until you come to a surprise ending.

When you read a book about Sherlock Holmes that wasn’t written by Arthur Conan Doyle, you are reading a pastiche. These books are written as a homage to the character rather than as an insult. Holmes isn’t the only character in pastiches, but certainly his outnumber all his fellow crime consultants.

The Global or International Mystery

Detectives, amateurs and police in foreign countries appear in mysteries from cozy to noir. You can find intriguing mysteries in every part of the word. Cara Black writes a series in which each book features a neighbourhood of Paris.

In a series, the author uses the same characters in successive books and their personal back-stories are often developed from book to book. Some writers have a character that doesn’t age, while others age as the series goes along. There are series mysteries in every subgenre.

Remember Nancy Drew and the Hardy Boys? There’s a delightful mystery for the very young. The Trouble with Chickens by Doreen Cronin. At every reading level there are mysteries to entertain the reader, and stump his, or her, brain.

There are endless ways to divide the mystery genre into the sub-genres we’ve mentioned above. Now we also have mysteries with dogs (Sara Driscoll’s FBI K-9 series is one of my favourites) and mysteries with cats, and other animals. Mystery series feature trains, and some that simply defy catagorizing.  It’s important to remember, as well, that a book doesn’t always fit into just one category. You could have an historical mystery, using a real character from the past (thus making it potentially an Alternative History mystery) featuring a murder that takes place in an enclosed area (making it a locked room mystery) which is solved by the village midwife (amateur detective and most likely a cozy.)

The attraction of a mystery is the puzzle it presents. All one needs to do is to find their favourite type and the reading list is seemingly endless. 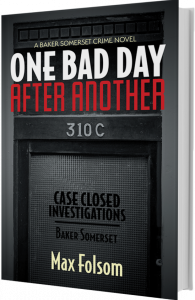